Based on long-term ethnographic research with Zanzibari-Omani families, this research focuses on the lived experience of translocal connections and their material entanglements.

The emergence of a translocal Swahili space
Mobility not only challenges the everyday lives of millions of people, it has also challenged scientific understandings of society, culture and space. Based on long-term mobile ethnographic research connecting Zanzibar, the Tanzanian mainland, Mombasa, Dubai, Oman and London, this project took up this challenge by exploring the translocal space emerging around contemporary Swahili trade.

Re-enlivening the Indian Ocean
Facilitated by the monsoon winds, trading connections were established across the Indian Ocean long before the appearance of European powers. Links between the Arabian Peninsula and Zanzibar became particularly strong, culminating in the Sultan of Oman moving his court to Zanzibar in 1832. Yet, with the so-called Zanzibar Revolution in 1964, the presence of people of Arab decent was violently challenged with several thousand being killed, and many more fleeing the country. In the following turn to socialism, many of their properties were confiscated and travel restrictions almost brought these translocal connections to a standstill. It was only since the mid-1980s that mobility between Zanzibar and Oman could slowly be resumed. Especially over the past two decades, family ties between Zanzibari-Omani in different places were revived and accompanied by diverse forms of investments in the islands of Zanzibar with regard to trade and housing (see e.g. Verne 2012, Verne 2016).

Re-turning home: Property restitution and diaspora investments within new urban housing developments in Zanzibar Town
In a setting characterized by a rapidly increasing population, over the last years, three major urban housing developments have been started in Zanzibar’s urban area (Fumba Uptown Living by the Bakhresa Group, Fumba Town by CPS and the AT ZSSF Mbweni Estate). So far, what all these projects have in common, is that they successfully attract private investments from members of the Zanzibari diaspora. While some use these newly acquired properties as holiday homes, many hope for high returns through offering them for rent. This way, these new housing developments have major effects, not only with regard to the re-intensification of Zanzibar’s translocal relations, but also for the local housing market in which rentals become increasingly relevant. Moreover, intensified relations in particular between Zanzibar and Oman have also led to a renewed interest of Zanzibari-Omani in their families’ former properties which have been confiscated in the aftermath of the revolution. Especially in the historical Stone Town such attempts to regain lost property meet demands for urban restoration. Yet, while some consider the diasporic engagement in housing as a rightful and welcome homecoming, it is also critically discussed as a neo-imperial endeavor by others. To engage with these current translocal dynamics through a historical lens, we put the houses at the centre of our empirical engagement: telling stories of mobility and disruption through the biographies of particular houses we wish to deepen our insights on the complex relations between emotional ties and their material expressions as well as their wider social repercussions in this particular postcolonial setting.

Verne, J. (2017) Following Swahili traders along the corridor and beyond: The emergence of a translocal Indian Ocean Space, in: Simone, A., Tavengwa, T. & Newhouse, L. (Hrsg.) Corridors, Max Planck Institute for the Study of Religious and Ethnic Diversity in association with Cityscapes Magazine: Johannesburg, 50-51. 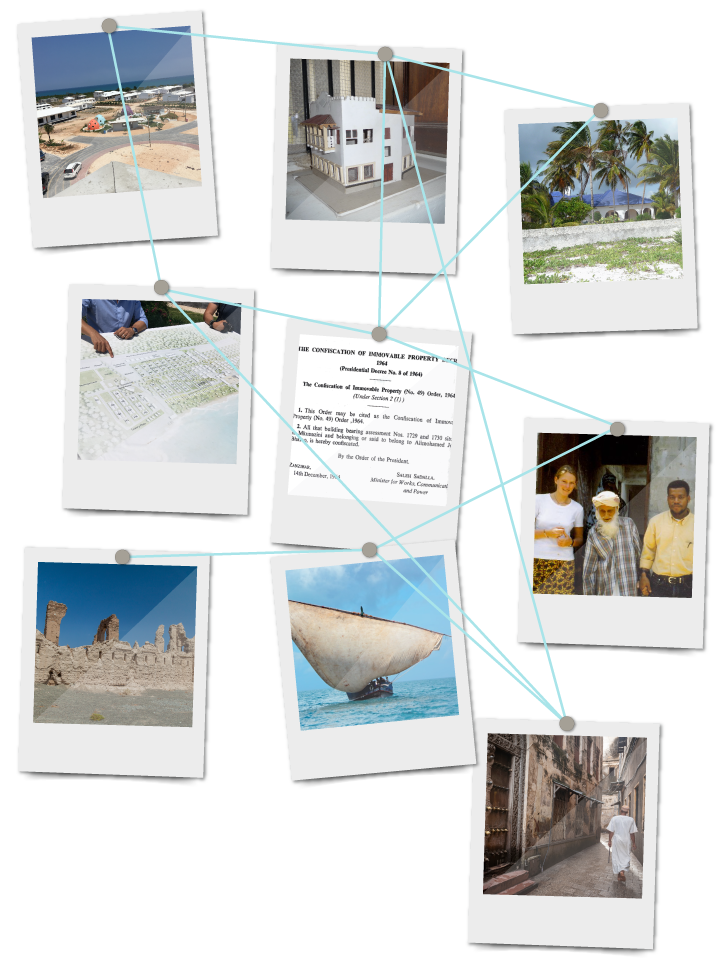